[Note: This is technically part of the series on DirectX, but is readable on its own, and does not require programming experience to be understood.]

At the end of my previous post on rendering 3D scenes with DirectX, you were able to render an object, but you would only see a specific narrow area (-1 to +1 in X and Y, 0 to 1 in Z). Well, that’s because we didn’t set up a camera into the scene. We can do that! But first, we need to know how cameras work.

Renderers like DirectX only really care about three properties of your camera. The first two properties are its position and its orientation (where it’s looking at); it’s pretty easy to visualize how changing those parameters will change the final rendered scene. The third camera property that DirectX cares about is the camera’s field of view, and that’s actually pretty tricky for people to visualize. So that’s what this article is about!

Let’s get started! Here’s an overhead view of a living room scene: 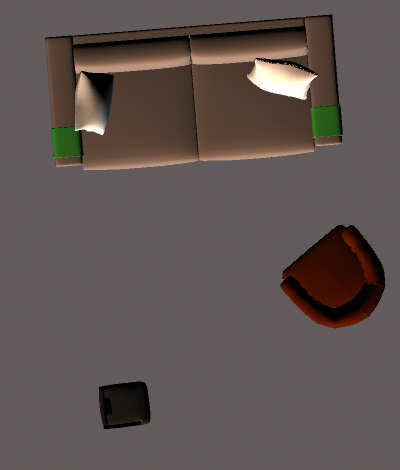 And here’s that same scene viewed from a camera at the front of the living room: 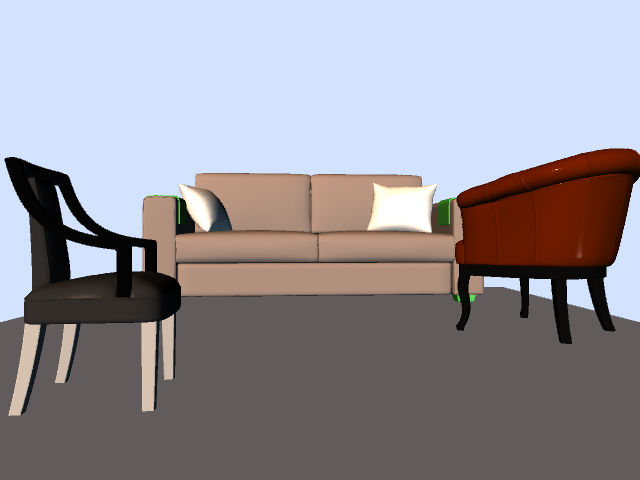 And here’s a fun fact!

Of course, that’s not true. Your mind instinctively understands that it’s the same scene, and the same furniture — the chair didn’t really grow bigger. The sofa only appears to be smaller because it’s further away from the camera.

That decrease in size with distance is called perspective, and it can be controlled. You can change how quickly things get smaller, and it creates different images. Check out this picture of the same scene, and hover your mouse over it to compare it with the previous image:

That image above is the same living room scene, except things get even smaller as they get farther from the camera. None of the chairs have moved between these two images.

So how do we describe the degree to which things in a scene get smaller as they get further away? It’s called field of view (or focal length if you’re working with real-world cameras, but I think “field of view” is a clearer term).

Field of view is measured in degrees, and it represents how much of the scene the camera can “see”. If a camera has a 70 degree field of view, then it can “see” anything at most 35 degrees to the left or right from the direction it’s facing. Hopefully, this image will explain things: 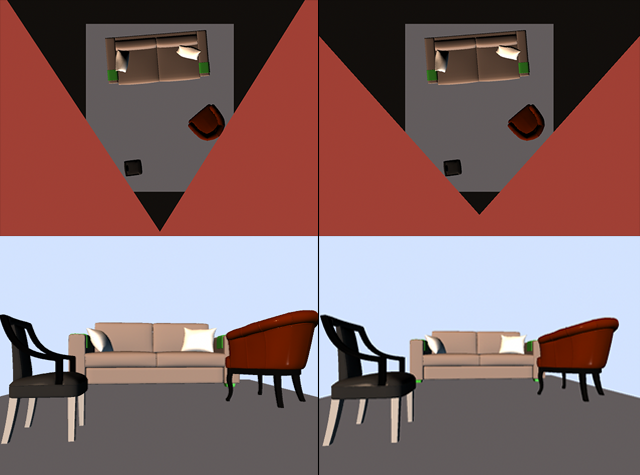 On top, we can see a birds-eye view of the living room with two wedges marking what two different cameras can see. On bottom is the image each camera produces. The camera on the left has a 70 degree field of view, meaning that the triangular visibility wedge in the bird’s-eye view is 70 degrees wide. The camera on the right has a 90 degree field of view, so its wedge is 90 degrees wide.

When the camera’s field of view increases, the camera can see more stuff. However, it doesn’t see equal amounts more nearby stuff and far-away stuff — it sees way more far-away stuff than nearby stuff. Check out how the visibility wedges for the two cameras are almost the same at the nearby black chair, but the 90 degree FOV camera on the right has a massively wider view wedge at the far-away sofa. In order to fit all that far-away stuff, things that are far away have to get smaller. And that’s perspective!

It looks like the world is growing more distant around the chair!

Movies use this effect way often, because it’s a super-fun way to express an idea to the audience.

Alfred Hitchcock’s Vertigo moves the camera back and increases the field of view here to make it look like the ground is receding, emphasizing the main character’s vertigo.

Steven Spielberg does it here in Jaws to show the main character — who just spotted a shark — losing track of everything else around him. Martin Scorsese’s Goodfellas does this trick in reverse (move the camera further away and decrease the field of view) here. This causes the viewer to feel the characters’ paranoia — the world around them is closing in, and they have to watch for an assassin in every corner.

So that’s pretty cool! You just learned a ton about cameras and it came with a free lesson in film appreciation. And come DirectX part 5, we’ll learn how to write our own 3D cameras and play with this stuff ourselves!